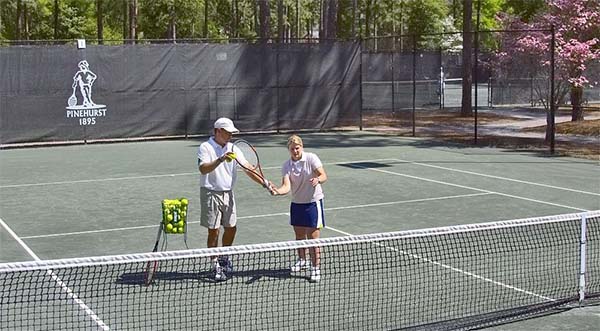 What am I doing at Pinehurst, the largest of all the country's golf resorts? I'm the guy, after all, who when asked whether he ever takes a set of clubs and heads for the fairways replies, "Excuse me? Golf is a four-letter word." The last place I ought to be spending a weekend is in a North Carolina village synonymous with g--f.

Pinehurst does, of course, have good tennis credentials. From 1994-96 this was the site of the U.S. Clay Court Championships, an era that drew Patrick Rafter, David Wheaton, Todd Martin, Mats Wilander and the Woodies, among others. The tennis clubhouse, built in the same white clapboard as the historic hotel, anchors a complex of 16 clay courts. This is at once a club for some 350 members and a major resort amenity. It also hosts the National Men's 70s, 85s, and 90s Championships and theÂ  N.C. Tennis Weekend, this last the kickoff event of the year for all industry leaders within USTA/NC.

The golf notwithstanding, tennis has an ever-strengthening foothold on guests' time. "We see our resort tennis business growing," Downing told me. A North Carolina native himself, he has been a part of Pinehurst for over a decade, having started out as head pro. Since taking over the directorship he has doubled the number of daily clinics—there are over a dozen weekly clinics as well as eight summer day camps for kids. He's also been even more focused on game matching: "We try to contact people in advance to set up matches if we know they're coming down," he says. "We try to go the extra mile." He has those 350 active members to draw on.

Meanwhile, the resort also has a spa, a fitness center, a large children's playground next to the hotel, and children's programs. The 16 conscientiously maintained clay courts are a five-minute walk from the historic hotel and so is the historic village of Pinehurst and its shops and restaurants. There are also three swimming pools on the property, croquet and lawn bowl courts adjacent to the main golf clubhouse, pickleball courts, an equestrian center, and even a lake with a beach and marina. And the amenities continue with seven restaurants.

In a peculiar way there are actually advantages to being at a resort most of whose guests are golfers. Court time is much easier to come by—and free on tennis packages. Granted, the infatuation with golf is inescapable, from the paintings of professional golfers, past and current, lining the walls to a rich wood-paneled bar called the Ryder Cup Lounge. But rather that sit inside and eavesdrop as golfers lament their performances on the fabled Donald Ross-designed No. 2, one of the top-ranked courses in the nation, I took my beer out onto the broad covered porch and relaxed in one of the many rocking chairs. You can spend a weekend here and never have to utter that four-letter word once.

Golf Courses. Pinehurst has 8, including the legendary No. 2, which is considered Donald Ross's masterpiece.

If you like the sound of Pinehurst, also check out:


Lodging at Pinehurst consists of the main old hotel, two inns (Manor and Holly) and condos.