Although Sea Island opened in 1928, the resort has undergone such a complete makeover during this century as to seem new. And in many respects it is. The original Cloister, the Moorish-influenced pink palace designed by Addison Mizner, which had long been the centerpiece of the resort, has given way to a larger and more opulent Cloister, this one situated scenically on the shore of the Black Banks River. Razing the old hotel made room for a 65,000-square-foot spa and fitness center and a neighboring complex of eight Har-Tru tennis courts, one of them a sunken stadium. Add an expansive Beach Club on five miles of private beach, three championship golf courses and a state-of-the-art golf teaching facility, a second eight-court tennis center, three squash courts, a shooting school, a nature and watersports center, horseback riding on the beach, fishing charters, and highly rated children's programs and you have one of the most complete resorts in the country.

Yet for all that is new at the resort, it remains wedded to tradition. Jackets are still required for dinner at the five-star Georgian room in the Cloister and at Colt & Alison, a steakhouse, in the Lodge at the Sea Island Golf Club on neighboring St. Simons Island. Returning guests look forward to the corn bread with bacon at Southern Tide in the Beach Club (as a new managing director, Rick Riess suggested to the chef that the dish would be healthier without the bacon only to be told that if he tried to remove it, he'd have "a riot on his hands"). Huge crowds—as many as 500 people—show up for, of all things, Bingo on Thursday nights in summer, an evening that requires jackets for men and boys and dresses for women and girls. But guests also return eager to see their favorite members of the staff, more than 100 of whom have been with the resort more than 25 years, long enough to see kids grow to adulthood (veteran tennis pro Dickie Anderson among them). 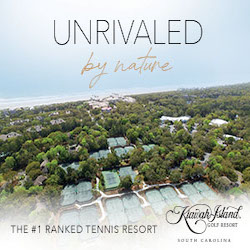 The Sea Island Tennis Academy caters to all levels, from Quickstart kids to advanced adults. Social tennis, not surprisingly, reaches its zenith during the busy summer months though there are clinics and drill sessions on the schedule every day during spring and fall.

Courts & Fees. 8 Har-Tru courts—one of them a sunken stadium—at the Cloister, another 8 at Retreat.

Beach. Five miles of salt-and-pepper beach extend along the Atlantic Coast of Sea Island, much of it bordered by low dunes and sea oats.

Golf Courses. The resort has three 18-hole courses, each recently redesigned, and its own golf school.

Seaside Course: Tom Fazio redesigned these 18 holes, 9 of which date to the 1920s, to make the most of its natural setting of tidal creeks, salt marshes and St. Simon's Sound. Ancient oaks and cedars, sandy dunes, and native grasses border the perfectly manicured fairways and greens, while ocean breezes add to the challenge.
Plantation Course: Rees Jones took 9 holes from the original 1927 Plantation course and married them to 9 hole from the original Retreat Course to create a parkland feel complemented by ocean views.
Retreat Course: The last of the courses to be reconceived, Retreat got the attention of the resort's touring pro Davis Love III. He lowered the profile and opened up the fairways to create a course that everyone could love playing, regardless of their handicap.

And ... Among the other recreation is a shooting school, horseback riding stables, bicycle rentals, sea kayaking, a nature center, and fishing charters.

Now offered year-round, Sea Island's children's programs divide kids into as many as five groups: ages 3 to 4, ages 5 to 6, ages 7 to 8, ages 9 to 12, and when appropriate teens. These organized activities go on all day and some evenings and include turtle nest patrols, manners courses, survival skills, adventure outings (kayaking, beach eco-labs, gyotaku fish printing), scavenger hunts, swim parties, and tennis and golf clinics.

There are 175 rooms and suites in the new Cloister Hotel and those are supplemented by 1-, 2-, and 3-bedroom suites in the beachfront Ocean Villas. All of that lodging clusters together near the Beach Club and spa. The alternative, and it is an elegant one, is to opt instead for the 40-room Lodge at Sea Island, which is not on Sea Island at all but 5½ miles away on St. Simons Island. And finally there are the Sea Island Cottages, which are privately owned and range in size from 3 to 8 bedrooms.

All of the restaurants on Sea Island and those at the Lodge are exclusively for the use of guests and members. Options range from the Snack Shack and Flip Flop Bistro at the Beach Club to the elegance of the five-star Georgian Room and numerous options in between.

Among the other tennis resorts with Sea Island Resort's history and grand style are:

Lodging choices are broadly divided in the Cloister, which includes the new hotel and additional rooms on the ocean nearby; the Lodge, and English manor-inspired 40-room hotel on the golf course; and the Cottages, privately owned homes.