Pebble Beach is to golf what Paris is to cuisine: it isn't that there aren't other reasons to visit, but all of them pale by comparison. This private 5,300-acre enclave on northern California's Monterey Peninsula embraces not only some of the most picturesque coastline anywhere in the west but also three of the nation's most alluring golf courses. Sooner or later, anyone with a bag of clubs has to make a pilgrimage to the legendary Pebble Beach Golf Links, which traditionally ranks among the top resort courses in America.

Nothing matches its breathtaking scenery, as many of its holes trail along the cliffs, rocks, and beaches at the very edge of the Pacific Ocean. And having come to play Pebble Beach, you can also look forward to Robert Trent Jones's gorgeous if formidable Spyglass Hill (the oldest course west of the Mississippi) and the narrow, duney Links at Spanish Bay (not to mention Cypress Point, a course nearly as magnificent as Pebble Beach but so private that not even the PGA can gain access). So what if you need to take out a second mortgage to cover the greens fees?

The stellar nature of Pebble Beach golf is an almost impossible act to follow, so it is surprising to find that this quintessential golf resort has paid exceptional attention to tennis. Tennis on the Monterey Peninsula does in fact have a tradition going back to before the turn of the century. Bill Tilden, Don Budge, Ellsworth Vines, Bobby Riggs, Elizabeth Ryan, Helen Wills Moody, and Alice Marble were among the greats who frequented the courts at Monterey's old Hotel Del Monte. Following World War II, when the hotel was sold to the Navy, the center of tennis action shifted to Pebble Beach where the late John Gardiner was head professional. He put Pebble Beach on the tennis map by bringing in the Kramer Pro Tour and the California State Championships.

Gardiner later established his now shuttered luxury camp a few miles away, but Pebble Beach still means tennis. The anchor is a handsome $3.2 million Tennis Club. Beautifully designed, from the wooden shelving in its boutique-like pro shop to the broad patios overlooking the dozen hard and clay courts, this is a place to meet and linger. Weathered teak tables with umbrellas overlook the sunken clubhouse court, whose backdrop of pine trees hides the 18th fairway and Pacific just beyond. The Lodge at Pebble Beach itself is just up the road, as is the spa in historic Casa Palmero, while a section of the magnificent 17-Mile Drive loops just to the north. How could you not want to play there?

No one who passes on 17-Mile Drive can fail to notice the change. Neither does it hurt that the courts are part of a wealthy and exclusive community, where not a few of the 5,800 residents have taken the phrase "a man's home is his castle" literally and where they can afford to impose stringent building regulations that ensure that the natural beauty of the area remains unspoiled. 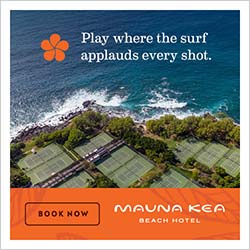 Tennis director Kie Foreman has shepherded this operation since 2000, providing the same level of service at the courts

that guests are accustomed to receiving at the nearby Lodge. A ranked junior in the Pacific Northwest, Foreman went on to play for Idaho State University and subsequently ranked as high as No. 14 in the Pacific Northwest Open Division. He later put in stints at two very active racquet clubs, one in California, the other in Oregon, and at the posh Boulders resort north of Phoenix.

Tennis Programs. The principal emphases are private lessons, a daily drop-in clinic, and game matching, the latter getting a boost for the decision to offer tennis-only memberships to those living outside the property. Otherwise, the menu varies somewhat with the season: summer brings on a well-attended junior day camp, which is open to the children of guests; in spring and fall, Foreman runs Nike adult camps on selected dates; and beginning in early 2012, he plans to stage special Pebble Beach camps during the months of January and February, the period when rates at the Lodge are at their most attractive.
Courts & Fees. The club has 10 hard and 2 clay courts laid out below an elegant full-service pro shop. Court fees: $12/person/day.

Golf Courses. Pebble Beach is a synonym for golf, of course, with five of its courses open to guests of the resort

Pebble Beach Golf Links: First laid out in 1919, it is often cited as the No. 1 public golf course in the U.S. As designed by Designed by Jack Neville and Douglas Grant, the course hugs the rugged coastline, providing wide-open vistas, cliffside fairways, and sloping greens. 5,349-7,040 yards Par: 72.
Spyglass Hill Golf Course: One of the most challenging courses in the country from the back tees, thanks to the Robert Trent Jones Sr. layout The name is inspired by the Robert Louis Stevenson novel Treasure Island (legend has it he wondered around the area in the 1860s), which explains why some holes have nicknames like "Black Dog" and "Billy Bones", appropriate given the extremely challenging course Robert Trent Jones Sr. laid out, beginning along the dunes and then up into the Monterey pines. 5,381-6,960 yards Par: 72.
The Links at Spanish Bay: A rugged, truly Scottish course, that makes the most of the Monterey coastline. 5,332-6,871 yards Par: 72.
Del Monte Golf Course: Laid out in 1897, this oldest course in continuous operation west of the Mississippi winds inland, its challenge rooted in its meandering layout. 5,435-6,357 yards Par: 72.
Pete Hay Golf Course: A 9-hole Executive course, the Pete Hay is ideal for working on your short game or introducing kids to golf. Par: 27.

Spa & Fitness Center. An historic estate home called Casa Palmero houses the award-winning 22,000-foot Spa at Pebble Beach not far from the racquet club. Not to be outdone, the fitness center at the Beach Club has state-of-the-art equipment, well-run classes, a heated outdoor pool, and a Dining Room with views of Stillwater Cove and Carmel Bay.

Broadly speaking, there are three options: the Lodge at Pebble Beach, Casa Palmero (both near the tennis center), and the Inn at Spanish Bay.

Options abound, from sumptuous French-Mediterranean cuisine of Club XIX and the Hawaiian fusion at Roy's of Pebble Beach to the more casual Gallery Cafe or Spyglass Grill.

If you're looking for a tennis resort with strong golf and a seaside setting, look at:

Rates are subject to tax and service charges.

Seasons. Year-round; however the best tennis weather—and most activity—occurs from March to November.