The Windridge Tennis & Sports Camp at Teela-Wooket in Vermont has a long history as a summer escape for kids, but until the summer of 2011 it did not have formal tennis programs for adults. That changed with the opening of the Inn at Teela-Wooket, an antique-filled six-bedroom, six-bath inn on the grounds of the camp. Now able to offer grown-up accommodations, founder Ted Hoehn personally runs several long-weekend adult camps at this Roxbury, Vermont site. For summer 2021, however, Hoehn now offers not only the option of five hours a day of tennis, but also a full day of golf instruction, or a combination of the two. (He purchased the nearby Northfield Country Club, 3 miles from Windridge.) The package thus bundles five hours a day of instruction with lodging, meals, and transportation to and from the Burlington International Airport.

Two things distinguish these adult programs: the intimacy—there can never be more than twelve participants—and the credentials of the man behind it. Born in Hanover, NH, Ted Hoehn picked up tennis at an early age—his father coached at Dartmouth College—and he quickly became the No. 1 junior in New England in many of his age groups. By age 18, he had a national ranking of No. 32 in singles and No. 6 in doubles, before taking his skills to the University of North Carolina where he twice captained the tennis team and won two ACC doubles titles.

Following a two-year stint in the U.S. Army, he returned to tennis, playing on the international circuit and reaching the doubles semi-finals at the Monte Carlo Open after teaming with the legendary Gardnar Mulloy. His success notwithstanding, he left the tour in 1968 to launch the Windridge Tennis Camps, originally in Jeffersonville, Vermont, and now at Teela-Wooket in Roxbury (he recently sold another site at Craftsbury Common). Although focused on the kids' programs, he did over the years occasionally succumb to the requests of parents to run small private camps for them. With the formal launch of these adult camps, he's making his expertise available to all.

His format is typical of other intensive camps. Sessions will last five hours a day, using four of the 21 red-clay courts at Teela-Wooket. "It will be very strong fundamental coaching," he says of his approach. "I believe that the basics are the groundwork for your game, so I'll 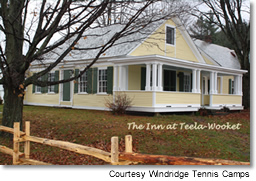 emphasize compact strokes and good court strategy." Courts will be available for campers who want more once the afternoon sessions finish as will options to play golf (they have a membership at a local course), ride horses, mountain bike, fish, or go antiquing.

Actually, to antique no one will have to go farther than the inn itself. "I happen to love antiques," says Hoehn, and he often brings back truckloads from his winter home in Vero Beach, Florida. "I furnished the Inn with those antiques, and each will have a price on it if they want to take it home." Campers will dine at the inn as well. "I've hired a talented chef for the Windridge camp and he'll prepare the adult meals on their weekends. We'll have wonderful food, and wine and beer are part of the tuition."

Ideally, he'd like to see entire sessions booked by couples that already know each other, but the sessions are open to couples and smaller groups as well.

If you're looking for an all-day tennis camp with lots of social atmosphere, also check out any of the following:

Travel Instructions. The nearest airport is Burlington International, a 45-minute drive to the north.