Located a mere 15 miles from the historic district of Charleston, Wild Dunes Resort is one of the rare vacation properties to afford the diversions of golf, tennis, beach, and marina within easy striking distance of a cultured city. The 1,600-acre property encompasses the northern tip of the Isle of Palms, a long, club-shaped barrier island on South Carolina's Atlantic Coast. It gets its name from the mounds of sea oats-tufted sand lining its 2½-mile-long beach. 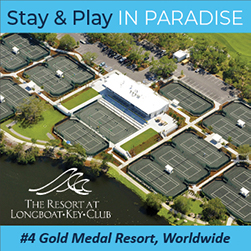 I first visited the resort in the 1980s and immediately fell under its spell. That glorious beach aside, it had a very active tennis program and became the host site for the U.S. Clay Court Championships, both of which helped it garner a ranking among the finest resorts in the country. There was one superb restaurant not far from the tennis courts. Bike lanes and a free on-property shuttle made it easy to get around. And best of all Charleston was close enough that you could stay at the beach and drive into town for dinner, an historic houses tour, the annual Spoleto Festival, and in spring the WTA's annual Family Circle Cup held on nearby Daniel Island.

Under the current management company, Destination Hotels & Resorts, the pace of development has accelerated. The resort looks spiffier than it has in years. The Village at Wild Dunes, a plaza really, comprises a restaurant, upscale market/deli, a day spa, and a fitness center on the main level and condominiums with hotel amenities like room service, bellman, and daily maid service on the floors above to either side. An amphitheater at one end provides a venue for occasional live concerts and the newest addition is a zero-entry swimming pool adjacent to the Village Plaza for the exclusive use of those who book through Wild Dunes Resort. The property keeps getting better.

As the one-time site of the U.S. Claycourt Championships, Wild Dunes Resort has a long history of devotion to tennis, having located its 17 clay courts—one of them a stadium—at the heart of the resort, just a short walk from the Boardwalk Inn and Village.

Tennis Staff. Tennis director Carlos Lozano is an All-American graduate of Brigham Young University. Originally from Mexico, where he was a five-time National Junior Doubles Champion, had previously directed operations at the 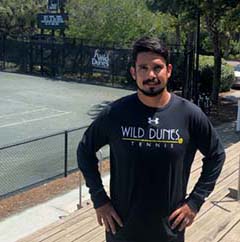 Topspin Racquet & Swim Club, in Lexington, SC, and was head professional and junior director at Long Cove Club on Hilton Head Island. In 2014, he was named USTA Southern Pro of the Year and the USTA South Carolina Pro of The Year. He also coached the 2018 Southern Junior Cup USTA SC Championship Team.
Tennis Programs. Wild Dunes kicks off each week in season with a well-attended Monday night exhibition, whose centerpiece is a doubles contest featuring staff. That event also provides a venue to introduce the weekly programs and services. Those include conscientious game matching, often drawing on local members, and a diverse calendar of weekly adult and junior clinics and round robins, among them sessions for beginning, intermediate, and advanced adults and for children as young as 4 years. The pro shop manager also coordinates activities, like the adult and junior round robins that take place each week, and matches guests looking for games. Rasheed and head tennis professional Shawn Harris continue to pursue group and team business. There are morning and afternoon programs for all skill levels and ages year round. The local membership includes over 100 active players, further adding to the overall tennis atmosphere.
Courts & Fees. There are 17 Har-Tru courts at Wild Dunes, one of them a stadium court, with permanent seating on one side, and a pro shop on the second story overlooking the complex. Five of the clay courts have lights. Light meals are as close as the deli in the nearby golf clubhouse. Court fees (for guests who book through Wild Dunes Resort): $15/hour before noon; one complimentary hour after noon.

Beach. The beach at Wild Dunes extends for 2½ miles, much of it bordered by tall dunes tufted with sea oats. Its dunes are higher than others found along this coast because there were no cotton or rice plantations of Isle of Palms and therefore its landscape was left untouched. The Grand Pavilion partway along sits just behind the dunes and provides a seasonal place for light meals, snacks, ice cream, and beverages. It also has two swimming pools overlooking the Atlantic Ocean.

Golf Courses. Tom Fazio designed the resort's Links and Harbor Courses, the first in 1980, the second in 1986.

Links Course: Fazio used the natural landscape of dunes, marsh, and oceanfront to carve out a true links course. Its finishing holes border the Atlantic at the very tip of the Isle of Palms. Both Golf Digest and Golf Magazine have ranked it among the Top 100 courses in the U.S. Par: 72. Length: 6,772 yards.
Harbor Course: More challenging than appears, given the relatively short yardage, since water or marsh comes into play on 17 of the 18 holes. Par: 70. Length: 6,359 yards.

Spa & Fitness Center. Its Sand & Sea Day Spa features locally made products. It offers a variety of skin-care and body treatments as well as massage therapy. Just across the plaza, accessible by using your room key, is the fitness center containing Cardio equipment, Paramount workout stations, and dumbbells in a partially mirrored room with views on the plaza and resort.

And ... There are two swimming pools at the Grand Pavilion, another at the Boardwalk Inn, and a junior Olympic pool at the Swim Center. Bikes can be rented at the tennis center, and fishing and boating excursions leave from the marina.

Wild Dunes' children's programs stand out for two reasons: they have a solid reputation for quality and they are either free or offered at minimal cost to guests who book their lodging directly with Wild Dunes Resort. Teens, meanwhile, can look forward to lounging at the pool and nightly entertainment and activities. Activities are most frequent from Memorial Day to Labor Day.

The 93-room Boardwalk Inn, though inland, is an easy stroll from the resort's sinuous 2½-mile beach. The five-story lodge was modeled, say the architects, on a turn-of-the-century Caribbean plantation house. It stands at one end of a grand boardwalk framed by colorful townhouses.

When it opened in the late 1990s, this small hotel brought a new dimension of lodging to a resort that previously could offer only villas and houses. The rooms on the front face west and have only little wrought iron French balconies, but many of those on the ocean side have full terraces and views of the courtyard pool below and of the rainbow-hued townhouses that line both sides of the boardwalk. The opening of the Village in 2008 further enhanced the lodging options by offering condominiums ranging in size from studios to three bedrooms but notable for also having such hotel-like amenities as room service, daily maid service, bellmen and valet parking while also having full kitchens, Ethernet connections, flatscreen TVs, and shallow balconies.

Otherwise, the lodging consists of a varied collection of condos and cottages, which range in size from one to four bedrooms, and of privately owned houses with as many as seven bedrooms. Some of these villas and houses front the ocean, others the Intracoastal Waterway, while others are inland, including a complex adjacent to the tennis complex.

Open for breakfast, lunch, and dinner, Coastal Provisions at the Boardwalk Inn is the resort's signature restaurant, with a menu that runs to steaks and chops. It has lounge and bar, a dining room, and an outdoor terrace overlooking the pool just steps from the ocean. Billy G's Smokehouse and the adjacent Salty Goat Bar serve up BBQ and brews respectively both inside and outside at the Village Plaza. Tennis players have Woody's Eatery for all-day breakfast, sandwiches, and salads, while golfers head to Huey's Southern Eats in the Links Golf Course Clubhouse for beer, cocktails, and Southern-inspired favorites. Finally, Hudson's Market purveys groceries, Lowcountry treats, wine, beer, and cheeses as well as coffee, sandwiches, salads, and ice cream.

If you're looking for other beach, golf, tennis resorts that also have good children's programs, also check out:

Seasons. Year-round but potentially chilly in winter. The greatest concentration of family activities occurs between Memorial Day and Labor Day.

Travel Instructions. From the airport: Take I-526 East to the Georgetown exit, Hwy. 17 North. Turn left at the light and follow Hwy. 17 North to Hwy. 517, the Isle of Palms Connector. Turn right only Hwy. 517 and proceed over the Intracoastal Waterway to the Isle of Palms. Once on the island, turn left at the light at the foot of the bridge onto Palm Blvd., Hwy. 703. Follow Palm Blvd. north to 41st Avenue, where you'll see the Wild Dunes directional sign to turn right onto Palm Blvd. (Extension). The main gate will be on your left.