Twenty-four people showed up for a social round-robin on a Monday morning during my last visit to Waterville Valley. The fee was $2/person for members and Waterville pass-holders to cover the cost of balls. Pairings were done by handing out playing cards: as a red 3 I played with another red 3 against the two black threes, and before the morning ended I'd played with or against most of the other players, most of whom seemed to be locals or second home owners.

Terraced into a grassy hillside and surrounded by forested mountains, Waterville's 18 red-clay courts rank, among the most beautiful places I've played. The resort encourages guests to take advantage of the tennis and many other outdoor activities by offering a special "Summer Unlimited" package through several of the lodges and condominiums. The pass that comes with it affords everyone in the room complimentary access to everything from tennis and golf to bike rentals, athletic club facilities, watersports on the pond, the chairlift to the top of the mountain (where there are hiking and mountain biking trails), and even ice skating. With so much recreation available, it's comforting not to have to think about cost each time you take up an activity.

The resort itself huddles in the valley. At its core stands a Town Square, a collection of shops and restaurants set beside a pond that spills over a rocky flume into a creek. Inns, lodges, and condo complexes fan out around it.

Not many resorts can trace their enthusiasm for tennis back more than a century. Waterville Valley still has the red-clay court that first lured players to this part of New Hampshire's White Mountains as long ago as 1884. Now a sunken stadium with grassy berms, it has been in continuous use ever since. What has changed over the last century is the size of its complex: now there are 18 red-clay courts and another two synthetic grass indoors at the nearby Athletic Club. Tennis remains, after more than 110 years, a reason to visit. Tennis director Tom Gross, Jr., who trained with Rod Laver, Roy Emerson, and Lew Hoad among other legends, owns the tennis complex and the Athletic Club and runs it with an eye to satisfying the families of avid players who vacation there during New Hampshire's glorious summers and fall.

Tennis Staff. Born in New England, Gross showed considerable talent as a child, winning his first tournament at age 6 and then going on to play for New England College while 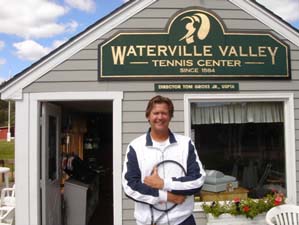 majoring in creative writing and history. But his love of teaching tennis determined his direction. "I made a commitment at 14, 15 years old to teach," he remembers. "While friends of mine were playing the New England juniors, I was teaching." During the tennis boom, he first taught for Laver-Emerson Tennis Holidays and then became its national director when Emerson left. He still employs much of their methodology in his teaching and clinics. He tends to focus on such things as preparation, contact, and follow-through r"ather than on the intricate details of technique. His first question for anyone taking a lesson is often "what's your playing schedule?" That answer determines his approach to teaching. "If someone plays only once a week, then you have to be careful to take what they have an make them better," Gross notes. "If they have time to practice, then you can be a little more creative." Above all strives to keep it fun.


Tennis Programs. Each morning during the summer the tennis center schedules 90-minute clinics for adults and juniors. Those are followed by well-attended adult round robins, which take place daily, and by another for juniors, which takes place three times a week. Game matching tends to be rather more perfunctory: there is a "Looking for a Game" board and when pressed the staff may try to help but tends to rely more on natural selection of the clinics and round robins to bring guests together. There is some kind of tournament almost every summer weekend. The pro shop, a tiny timber structure with a deck overlooking the courts, has all the services you're likely to need. For details about the programs, see Waterville Tennis.

Golf Courses. The resort has a 9-hole golf course, which winds around the valley floor; however guests also have privileges at the public Owl's Nest Golf Course in Thornton, roughly a dozen miles away. Designed by Cornish, Silva & Mungeam, Inc., this 6,818-yard, par 72 championship course follows the natural topography of the Pemigewasset River and the White Mountain National Forest. It has five sets of tees on each hole, bentgrass fairways and manicured greens, which makes it accessible to golfers of any skill level.

And ... Kayaks, pedal boats, and canoes are available for use on Corcoran's Pond, there are mountain bike trails and a mountain-bike park, an ice-skating rink, hiking trails to the summits of the valley's 4,000-foot peaks, and a gymnasium for basketball and indoor floor hockey.

Waterville runs a summer recreation camp for children ages 4 to 16. Activities vary by age, including some specifically for teens. The resort also operates a free valley-wide shuttle bus to make getting around easy.

There are half a dozen places to eat in Waterville, from delis and pizzerias to seafood and steaks in the Wild Coyote Grill at the Athletic Club

Among the other tennis resorts with active programs and excellent family activities are:


Rooms in Waterville Valley range from simple accommodations for 2 in a country inn to 3-bedroom condos capable of sleeping 6.

Seasons. The outdoor tennis season runs from June through October, though play is possible indoors year-round.

Travel Instructions. The nearest airport is Manchester, NH, 70 miles to the south. Other options are: Boston, 130 miles; Montreal, 225 miles; and New York, 325 miles.