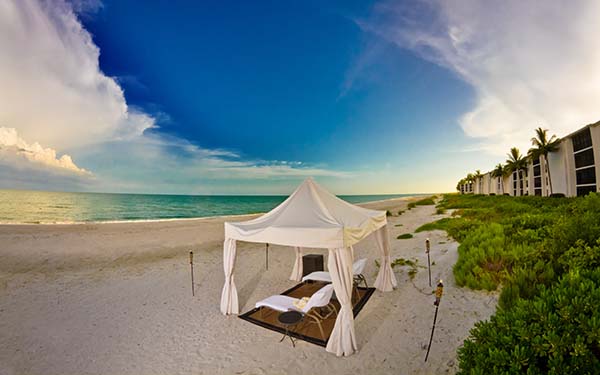 Unfortunately, the resort suffered major damage after being hit by Hurricane Ian. No reopening date has been published. Check the website for any recent news.

Sanibel Island, like its neighbor Captiva Island, extends into the Gulf of Mexico not far from Fort Myers on Florida's southwest coast. The two barrier islands are famous for their world-class shelling, and in the morning especially, early risers stroll along the beaches in search of ornate and colorful souvenirs. Sanibel's Sundial Beach Resort & Spa occupies prime real estate that begins along a Gulf of Mexico beach and extends inland. It encompasses some 400 hundred fully equipped condominiums, variously with views of the beach, Gulf, or gardens, as well as a spa, fitness center, kids' club, and several restaurants and bars. Sundial has also always taken its tennis seriously, staging clinics, private lessons, tournaments, and social play on its six HydroGrid clay courts. Then in 2017 it was early to catch the wave of enthusiasm for pickleball, not only installing a dozen lighted Plexipave courts—one of them a stadium—but also putting in place a broad range of programs, including tournaments, camps, clinics, and social play, all overseen by a staff of ITPTA-certified tennis pros. As a result it has emerged as one of the top pickleball destinations in the nation.

Racquet Sports Director Josh Jeffcott oversees the tennis and pickleball staff. Originally from Ft. Myers, he became a top junior tennis player (he competed in his first tournament at Sundial when he was just 8) and went on to play for Florida Gulf Coast University. After being certified by the U.S. Professional Tennis Association, he became fascinated by pickleball and went on to earn an IPTPA certification for that sport.
Tennis and Pickleball Programs. Jeffcott and his staff stage a broad range of programs for both tennis and pickleball. That includes clinics, round robins, tournaments, game matching, private lessons, and social play supplemented by 3-day/2-night pickleball camps, which are typically staged once a month from July through December. Courts & Fees. There are six clay courts and 12 hard pickleball courts.

For other top pickleball resorts, take a look at:


The resort has studios and 1-, 2-, and 3-bedroom condos. Rates vary with size and view. Check with the resort for latest rates

Travel Instructions. By Air: The nearest airport is Southwest Florida International Airport in Ft. Myers, 10 miles from the resort.

Here's what others have had to say about Sundial Beach Resort & Spa (CLOSED).