Since it opened in 1928, the Ponte Vedra Inn has evolved from a 12-room log cabin into a 300-acre resort strung along half a mile of Atlantic beach. The surviving section of the old Inn consists of the Main Dining Room, the Audubon Bar, and a Great Lounge with a huge fireplace at each end, appealing sitting areas furnished with couches and chairs, and a cathedral ceiling with exposed beams. Check-in formalities take place European style at an oversize desk in its lobby. From there guests spread out into rooms and suites tucked into a necklace of two-story structures strung along its Atlantic beach, which means almost every room has a full oceanfront view (the exceptions are the historic rooms in the original inn). Amenities abound, including a central clubhouse, five restaurants, a seasonal Surf Club, a snack bar, a tavern, and a gourmet shop and bistro as well as a two-story fitness center, a 28,000-square-foot spa, two 18-hole golf courses, and a handsome racquet club with 15 HydroGrid courts.

Great tennis resorts generate a sense of excitement for the game. At Ponte Vedra, the staff seems to have an intuitive sense for the kinds of activities and services that avid players crave. The eight pros not only give private lessons but also put on 27 drills clinics/week, stage twice monthly mixers, and coach 50 teams. Matches go on all day as the diligent staff works to put together players interested in games. A covered courtside deck with tables and chairs and complimentary coffee encourages hanging around.

Tennis Staff. Aleco Preovolos directs the racquet club's operations. A four-year All American in singles and doubles at 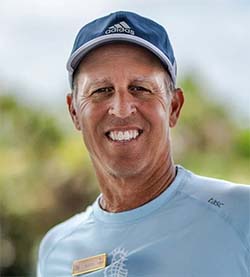 U.C. Davis, he went on the play the professional tour before transitioning to coaching. In his 10 years in that role he mentored Wayne Ferreira and Amanda Coetzer and guided the doubles team of Rick Leach and Ellis Ferreira to an Australian Open doubles title and the world's No. 1 ranking. Previously the club's assistant director, he has a strong grasp of the needs of both members and guests.
Tennis Programs. Instructional programs vary seasonally, partly in response to the needs of local members. In any given week you can expect to find a variety of stroke and drill clinics, mostly geared to novice and intermediate players, as well as a series of clinics for kids from age 5 and up. During selected weeks in summer, there are Monday-Friday day camps whose 2.5-hour morning session cover all the basic strokes and singles and doubles strategy as well as conditioning, equipment, court etiquette, and footwork at a level appropriate to each child's skills.
Courts & Fees. The complex consists of 15 Har-Tru courts, 8 with lights, anchored by a two-story clubhouse with an elegant pro shop and a 2nd-story viewing area. Court fees: $20/person/day; however, the basic tennis package includes unlimited free court time.

Beach. Once 50-foot-high dunes, like those on Amelia Island to the north, lined this stretch of beach. That was before National Lead—the predecessor to Union Carbide—bulldozed them for their titanium more than half a century ago. What survives is another broad boulevard of sand and shell perhaps 40 yards wide at high tide and more than double that at low. It's made all the more appealing by the absence of both crowds and any Atlantic-front building taller than two stories. Most of the rooms face the beach directly, so by opting for lodging on the first floor you can walk off your back terrace virtually onto the sand.

The resort itself fronts roughly half a mile of beach. Toward the southern end stands the Surf Club, a complex of outdoor swimming pools, restaurants, and a fitness center that is the social heart of the resort, especially for members.

Golf Courses. Golf at Ponte Vedra dates to 1928 and the opening of the Ocean Course, which must over a decade later hosted the Ryder Cup. Today there is a second course:

Ocean Course: These 18 holes were originally designed by British golf architect Herbert Bertram Strong in 1928 and subsequently redesigned by Robert Trent Jones in 1947 and then Bobby Weed in 1998. It's a course that demands accuracy, with 99 strategically positioned sand bunkers and elevated greens. A par 72, it plays 6811 yards from the gold tees.

Lagoon Course: A mosaic of lakes and lagoons make water the dominant feature on this 6,022-yard, par 70 course. Robert Trent Jones and Joe Lee first designed it and then in 2007 it was restored and remodeled by Bobby Weed. The course, although not especially long, demands controlled and accurate shot making: all fourteen clubs are required here. Tall pines, palms and ancient, sprawling oaks form the contours of this lushly landscaped course. Fairways are narrow, but kept in immaculate condition, and the greens, perfectly manicured, are small and fast.

Spa & Fitness Center. In November 2006 the Inn opened its new 28,000-square-foot spa in south of the Racquet Club with its back to the lagoon and the golf holes along it. The Inn's fitness center is remarkable for its second-floor location immediately behind the pools at the surf club. Floor-to-ceiling windows frame views of the Atlantic. To take advantage of those views it is designed in three tiers: with cardiovascular equipment on the lowest tier, then a full suite of Cybex machines, and finally free weights.

And ... Apart from everything else, the inn has four oceanfront swimming pools: a family pool with a water slide and connected lap pool and two adults-only pools, one for laps.

Although some limited children's programs take place throughout the year, from June through August it runs week-long children's camps. Designed for children ages 4 to 12, these unusually have a different theme and activities each week. There are also junior lifeguard camps, for ages 5-8 or 9-14 that teach about ocean dangers and how to overcome them bundled with first-aid, lifeguard skills, swimming, volleyball, soccer, ultimate Frisbee, and ocean-themed movies.

Accommodations consist of 249 rooms and suites. With the exception of the 21 rooms and suites in the inn and the golf villas, all of the rooms are oceanfront, with large balconies or patios looking across a broad beach at the sea. Decorated with exquisite taste, these rooms occupy a necklace of two-story buildings strung along the beach to either side of the resort's Surf Club and across from the 1937 inn. All are junior suites, with a convertible sofa and second television in the sitting area, and an oversize marble bath. There's another set of rooms in Island House overlooking the lagoon. These do not have ocean views but make up for it in the generous layouts, some with fireplaces.

Although most of the dining at the inn falls into the pleasantly acceptable category—breakfast at the Inn Dining Room, lunch at the Golf Clubhouse or Surf Club patio—its Seafoam Dining Room, on the second floor of the Surf Club overlooking the ocean, stands out for its excellent cuisine, especially the local seafood, and professional, attentive service. Jackets are required after 6:30 p.m. and ties encouraged.

The Ponte Vedra Inn is a very unusual property, a small resort with very deep dimensions, including excellent tennis, golf, a beach, spa and fitness center. If you need all those aspects, then check out:

If you can give up one or more of those elements in exchange for a similar level of creature comforts and attention to tennis, then check out:

In general, high season at the Inn occurs during the spring. Accommodations range from small deluxe rooms to a presidential suite. Tennis packages are also available.

Seasons. Although open year-round, Ponte Vedra's location in northeast Florida means that its winters can be too chilly for the beach and Atlantic to be appealing—though the cooler weather at that time of year invites tennis, just don't expect as much activity. The period from May through August—the "social season"—tends to be the busiest, with an influx of families especially over weekends and school holidays before reaching a zenith in summer. Summer is also the season the tennis complex runs its adult and junior tennis camps.

Travel Instructions. The Inn is 20 miles southeast of Jacksonville International Airport (JAX). To reach it by car, take Butler Blvd. East (Exit 101) off I-95 and follow it for 13 miles to A1A North. Travel 1/4 mile to Ponte Vedra Blvd. (there's a sign for the inn) and turn right. The inn lies another 1.5 miles along.