The Penina Hotel near Portimao and its Sir Henry Cotton Championship Golf Course opened in 1966. Considered a masterpiece of design, at once challenging and beautiful, the course would eventually host 10 Portuguese Opens, and helped to establish the Algarve as a golf destination. The resort later added two additional 9-hole courses and a golf academy and a complex of five tennis courts.

"Twenty years ago the resort was known for its tennis, too," Joao Pinheiro, the resort's marketing director told me. "Then the former management focused on golf, bringing in large groups who left no rooms available for the tennis groups who wanted to come." The current management, JJW Hotels & Resorts, wants to change that. Now the host 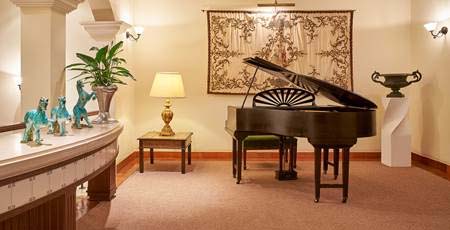 site for the Portugal Tennis Tour Under 16s, the hotel is seeing a renewed interest among tennis vacationers. It has resurfaced two of the five terraced hard courts and will resurface the remaining three by Easter of 2020 and has begun to promote the resort as a destination for groups.

The hotel, while very traditional in its public spaces—the original owner had ties to the British royal family—has handsomely updated the 188 rooms, all of which have balconies. The swimming pool is one of the largest in the Algarve and its also has a amenity-rich, dedicated kids' club which has its own swimming pool and has the added benefit of being complimentary. There are five restaurants on site, and its location several kilometers inland means you can escape the crowds that throng places like nearby Portimao while still having access to a beach and beach club, which is a free shuttle ride away. Says Pinheiro: "Here they can hear the sound of birds in the morning" rather than those of revelers who've been out all night. The junior tournament has contracted for another two years and there is a local teaching professional on call for lessons. When it comes to tennis, this is, truthfully, a work-in-progress, but, says Pinheiro, the exposure they're getting from the tournament has led to a rediscovery of Penina's possibilities as a tennis destination and inquiries from groups about coming down. And, indeed, a tennis group from Great Britain was checking in as I checked out.

There are five hard courts available to guests at €15/hour and a pro on call for private lessons.

Beach. In season, a free shuttle takes guests to Dunas Beach and the beach club there.

Spa & Fitness Center. There is a small fitness center open via room key and a couple of massage rooms

And ... In addition to the large swimming pool, there is a football pitch and bike rentals

The resort's Kangaroo Club spreads across some 3,000 square meters at the back of the hotel. It encompasses and indoor play with toys and furniture as well as an outdoor space with a swimming pool, climbing area, football pitch, bicycle track, and a sand pit. During summer season a supervised bouncy castle is also set up. There is a Kangaroo Club Restaurant, a state-of-the-art crèche with baby changing facilities, a designated toddler area, and a fully stocked game room.

All the rooms and suites have balconies looking out on the swimming pool or mountains.

There are six restaurants and bars, one of them at the beach and open only seasonally.

If you're looking for other resorts resorts in this region, check out our Tennis Map of Europe

and for comparison's sake, also take a look at:

So far, I haven't received any written feedback on Penina Hotel & Golf Resort. If you've taken a tennis vacation there, I'd like to hear your reactions.