The Mauna Kea has what even a local cab driver describes as "the best beach on the island." This long crescent of white sand, fringed with obligatory palm trees, follows the outline of a shallow cove anchored by lava-rock promontories. The hotel sits atop one of those rocky outcrops in a garden of exotic flowers and trees accented with Oriental sculpture. Off to one side a terraced hillside holds 10 tennis courts, the lowest of them so close to the sea that you can hear the sound of waves breaking on the black-lava rocks, and two permanent pickleball courts.

Tennis almost never snags such prime real estate, and several years ago previous tennis director committed the unthinkable act of taking a chainsaw to some of the tennis complex's exuberant foliage, which goes wild in the tropical heat and fertile soil, in order to open up those sea views. If that requires coping with a bit more wind on some days, it seems like a reasonable trade off since it means being able to gaze at the ocean at changeovers and perhaps spot a whale sounding just offshore.

Though now owned and managed by Prince Resorts Hawaii, the hotel was an early foray by Laurance S. Rockefeller's into luxury resort development. In 1965 he looked at a black-lava desert miles 25 miles north of the town of Kailua-Kona and envisaged a luxury golf and tennis resort. Everyone thought he was crazy; he proved them wrong by attracting a wealthy international clientele, who actually liked the fact that there were no telephones or televisions. As one of the first RockResorts, Mauna Kea became a synonym for the ultimate resort vacation.

Both the traveling public and the resort have changed over the intervening decades: guests today have much larger rooms, flatscreen televisions, phones, and high-speed Internet access in their rooms, and the Mauna Kea shares this coast with more than half a dozen resorts, all of them carved out of the black lava. None affords a more beautiful setting for tennis or has as much on-court activity, a fact reflected in its consistent Top 100 rating in the list we compile annually based on vacationer reviews. 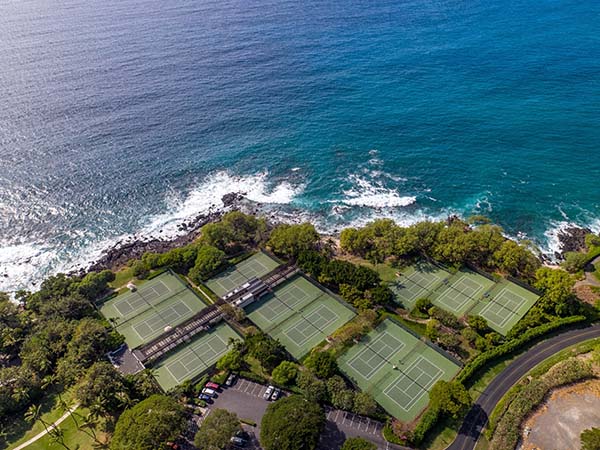 Tennis director Craig Pautler is actually in his second stint overseeing this tennis operation. Although his return in 2004 was not quite so dramatic as an eruption of the Kilauea Volcano at the southern end of the island, it did alter the Hawaiian resort tennis landscape. Pautler, who was there in 1977-82 before moving next door to the Mauna Lani and then up to his daughters' former prep school in Waimea, lives and breathes customer service. Stroll through the glass doors of the pro shop, and you'll be greeted by someone who seems genuinely thrilled that you came and will ask, almost without fail, "Can we get you a game?" or otherwise find out about your tennis needs.

The weekly calendar is a blend of private instruction, clinics and social and competitive round robins, along with kids' programs during the summers and busy holiday periods and a ball machine for the hard core who just want to hone strokes. What brings avid players back year after year, however, is the tirelessly attentive tennis staff, who understand how important it can be just to play. They not only put together singles, doubles, or mixed doubles matches, often drawing on their own stable of active local members, but they also deliver a continual supply of towels and ice water throughout your time on court.an we get you a game?" or otherwise find out about your tennis needs.

Since his return, Pautler has revitalized the program and beautified the complex and constantly worked to keep make improvements. Courts are resurfaced regularly on a rotating basis, old furniture is replaced, structures painted. It took him just over a year to take Mauna Kea to the No. 1 position among Hawaii's tennis resorts, but from his perspective staying ahead of the competition requires continual attention to every aspect of the tennis experience, from keeping the courts clean (he and his pros, not the landscaping staff, personally wash every court every few weeks because that way they're more likely to notice other things needing attention) to making sure every guest's needs are met and more. With him back on court, this entire stretch of the Kohala Coast—and the tennis resorts on the rest of the Hawaiian Islands for that matter—once again have a working model of superlative service.

Beach. A perfect crescent of beach, generally regarded as one of the finest resort beaches in the Hawaii, lines the Kauna'oa Bay immediately below the hotel.

Golf Courses. Robert Trent Jones, Sr. designed the 18-hole Mauna Kea Golf Course, which ranks among the finest in Hawaii and following a $50 million upgrade has once again become one of the most demanding. It is characterized by elevation changes, large undulating greens, and some 120 strategically situated bunkers. Its third hole, which borders an oceanfront inlet lined with lava rock, is so stunning that it's often chosen as the site for weddings. Guests also have access to the nearby Hapuna Golf Course, which was designed by Arnold Palmer and Ed Seay and won awards for its environmental sensitivity. It begins near the shore and climbs to 700 feet above sea level.

And ... Mauna Kea's fitness center consists of two rooms, one paneled with wood and filled with Cardio equipment and dumbbells, the other lined with mirrors and furnished with a dozen LifeFitness stations. Both have tall windows that afford views on the gardens bordering the swimming pool outside. The boutique spa is nearby, though rather than have your treatments in rooms there, you can just as easily book them for locations at the Tennis Garden, a spot beneath mesquite-like kiawe trees right along the ocean, or in your own room.

The resort's children's program entertains kids ages 5-12 year-round and focuses on outdoor activities as much as possible, utilizing both the Mauna Kea and nearby sister Hapuna Beach properties. And the staff at Seaside Tennis Club also expands junior tennis offerings during major holidays and summers.

You might expect any hotel more than four decades old to be showing signs of age. The rooms, however, received a complete makeover after an earthquake in 2006 caused structural damage. Although some of them remain a little on the small side by modern standards—particularly the bathrooms—they make up for it in their deep, full-width lanais with ocean or mountain views, tasteful contemporary Hawaiian furnishings, and handsome paneled wall units with flatscreen TVs, coffee makers, and both an Ethernet and wi-fi connections. Room sizes vary depending on whether you're in the beach wing or original tower, but all have lanais and view of either the ocean or golf course and mountains. Electronic keys provide access to your room, the 24-hour fitness center, and self parking.

Manta Pavilion and Wine Bar takes full advantage of its views of the gardens and sea on Manta Point for a menu that focuses on locally available seafood, beef, lamb, and vegetables prepared in an exhibition kitchen. As you enter, you pass several Enomatic wine dispensers that allow you to taste any of almost 50 wines simply by purchasing a prepaid card from the Manta Bar. That is complemented by the Copper Bar, now newly transformed with new art and a skylight but with the same views of the bay and an 11 a.m. to 11 p.m. menu of craft beers, artisanal cocktails, tapas, entrées and sweets.

If you're looking for a beach, golf, and tennis resort along this part of the Kona Coast, see the Southwest & Hawaii Map. For a location other than Hawaii that combines a beach with high-quality tennis, golf, and spa, also check out:

Travel Instructions. It is pretty much a straight shot north on Hwy. 11 from Kona Airport (which itself is north of town) to a left turn into Mauna Kea Resort and a winding road along the golf court to the porte-cochere of the hotel, a distance of roughly 25 miles.