Innisbrook's first love is golf, so much so that its lodging complexes all bear the names of famous golf venues: Augusta, St. Andrews, Turnberry, Carnoustie. Within the 900-acre property reside four 18-hole courses, among them Copperhead, home to the PGA Tour's Valspar Championship. But nestled in the embrace of one series of fairways is a beautiful tree-rich complex of 11 Har-Tru courts, anchored by a two-story clubhouse. With a solid staff and abundance of programming, Innisbrook tennis ought to be better known. This was once, after-all, the site of the Florida Federal Open, part of the Virginia Slims World Championship Series (a hardcourt event), and the Continental Players Cup, an international junior competition. But times change, the tennis spotlight moves on, and Innisbrook dropped off the radar as a tennis destination. Now, however, a concerted effort is underway to once again raise its tennis profile—to, as tennis director Joe Mattingly puts it "get Innisbrook tennis back on the map."

As part of that effort, Mattingly spearheaded a move to bring professional tennis back to Innisbrook, and in 2019 that took the form of an $80,000 women's USTA Pro Circuit event. Hoping to get a strong field, he scheduled this tournament—which is expected to be annual—the week following the Miami Open, reasoning that the women who didn't qualify for the Volvo Cup in Charleston could be lured to to start their clay court season at Innisbrook, especially since many of them might be training at nearby Saddlebrook Tennis or the IMG Academy. During the same week, Innisbrook staged an Invesco Challenge QQQ event with John McEnroe, Jim Courier, James Blake, and Mardy Fish. 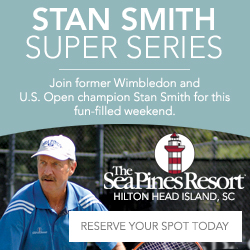 It is, of course, one thing to announce that tennis is once again being take seriously and another to deliver on that promise. Under Mattingly, a former tour player who has a long history of directing country-club programs, and his head pro Judi Alford, a national standout in her native Britain, Innisbrook can now offer a smorgasbord of drop-in clinics, variously devoted to single, doubles strategy, along with four social events and a men's night. There are half- and full-day fully customizable camps, "And I mean fully customizable," says Mattingly, "down to do you want a margarita bar, a champagne bar?" Former Grand Slam doubles champion Gigi Fernandez has an academy nearby and brings her larger groups to Innisbrook for special camps, working with Innisbrook's pros but adhering to her own "Gigi Method." Meanwhile, kids will find everything from Quick Start introductions to tennis to advanced sessions for tournament players as well as holiday and summer junior tennis camps. So the tennis is back at Innisbrook; it only remains for the world to find out about it.

Beach. The nearest beach is 3½ miles west on the Gulf of Mexico.

Golf Courses. There are four 18-hole courses, all designed by Lawrence Packard, among them the highly rated Copperhead, which is the site each March of the PGA Tour's Valspar Championship.

Copperhead Course: A challenging 7,200 yards of tree-lined fairways and rolling terrain much of it through parts of the resort mostly free of residences. Par 71, 7,209 yards.
Island Course: Another long course, characterized by tight fairways, intimidating water hazards, abundant bunkers, and elevation changes. Par 72, 7,194 yards.
North Course: The shortest of the quartet but tight, with water hazards on 11 of its holes. Par 70, 6,325 yards.
South Course: Here the obstacles come in the form of fairway and waste bunkers, water hazards, and Gulf of Mexico breezes. Par 71, 6,620 yards.

Spa & Fitness Center. Salamander Spa is a 12,000-square-foot indoor-outdoor retreat with 12 treatment rooms and an outdoor terrace. The adjacent building has a fitness center, with a full range of workout and cardio equipment in a large room with windows on the outside world front and back as well as two studios for a variety of fitness classes. In addition, there are saunas at the Island Clubhouse and Jacuzzis at the Island, Copperhead, and Loch Ness pools

Lodging at Innisbrook begins with deluxe bedrooms with two queen beds and ranges up through spacious one- and two-bedroom kitchen-equipped condominiums with broad terraces. All of these are scattered through more than two dozen two-story buildings many with views of the golf fairways. A complete—and much-needed—modernization of all the rentable rooms is currently underway, with the last of them slated to be completed by Fall 2019

There are four restaurants, variously offering sandwiches and pub fare to seafood and dry-aged steaks. There is also a small market, with a few essentials as well as coffee and pastries.

Apr. 18, 2020: Champions Classic At Innisbrook Golf Resort
Four former top players face off in their own mini-tournament, with options to play the pros. Once the field has been announced, we'll post it here. .

For comparison's sake, also check out:

General Tourist Information. For information about the area around Innisbrook, visit the Palm Harbor section of the VisitFlorida.com website.