The bottle-nose dolphin seemed quite happy to tow me around a lagoon in exchange for a few fish doled out from the hands of the trainer at the Dolphin Connection. It took very little effort on his part, though I'd never moved through the water so fast without the aid of wind or motor, and I was astonished to feel just how powerfully these mammals swim. I came out of the water with an even deeper respect for these lovable animals.

Set on Duck Key, Hawk's Cay Resort takes up all of a roughly boot-shaped 60-acre private island just off the Overseas Highway to Key West, 97 miles south southeast of Miami. Its focal point is a 177-room hotel, which rises behind a perfect circle of a lagoon fringed with sand, but for a small resort it harbors an extensive array of distractions, including a spa, several restaurants, five swimming pools, an 85-slip marina, a watersports center, fishing and scuba diving charters, a dedicated children's center, a tennis and pickleball complex, some 100 two-, three-, and four-bedroom villas, and, of course, that dolphin encounter.

Cliff Drysdale Tennis oversees the operation of the tennis club, which consists of two Hydrocourts, and four hard courts. Trevor Spencer directs the 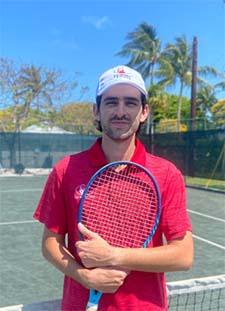 programming.Originally from San Angelo, Texas, he has a Masters Degree in Coaching and Sports Administration from Angelo State University. He previously taught at John Newcombe Tennis Country Club in Texas and the Omni Amelia Island Resort in Florida taking over as Director of Racquets here at Hawks Cay.
Tennis Programs. At Hawks Cay, he inherits a stable of local players who along with guests are kept active with morning adult clinics, Cardio tennis, and family tennis classes throughout the week as well as private and group lessons. The staff also arranges singles and doubles matches or, alternatively, a "beat the pro" lesson option at half the price of a regular lesson if you win more games than the pro, while a once-weekly round-robin affords another way to meet compatible players. There are also one-hour clinics for kids, broken into two groups: ages 4-7 and 6-12. He rounds that all out with a willingness to custom-design programs for groups and teams. For those looking for pickleball, Spencer offers clinics, private lessons, and social robins.
Courts & Fees. There are currently four tennis courts—two Hydrocourt and two hard—as well as eight permanent pickleball courts. Court fees: None for guests; $10 for two hours for those staying elsewhere.

Beach. You won't find a beach washed by the ocean but rather one that encircles a salt-water-fed, man-made lagoon that is part of the resort..

Spa & Fitness Center. The resort's Calm Waters Spa mixes traditional with locally inspired spa treatments. The fitness center in another part of the same building has a variety of weight-training machines and cardio equipment.

And ... The most unusual of the other activities is the Dolphin Connection, which takes small numbers of people into the water to interact with the dolphins while anyone in the resort is free to watch from the side of the dolphin pond. Otherwise there is a fully equipped marina offering sportfishing charters, dive boat and snorkeling excursions, kayaking, paddleboarding, and sunset cruises. Other watersports equipment, including standup paddleboards and kayaks, are available in the lagoon.

With its own building and a fenced playground with everything from miniature golf to a pirates' ship, the Indies Club schedules a full day of activities from 9 a.m. to 4 p.m. for those ages 5 to 12 as well as a variety of social and recreational activities for teens.

The main block of accommodations are the 177 rooms and suites in the main hotel. These have a West Indies decor, upscale amenities, and, with the exception of a few standard room, broad terraces with views of the island or water. Alternatively, the resort offers villas ranging in size up to four bedrooms and situated somewhat removed from the main hotel in four villages.

There are half a dozen dining outlets, including 61 Prime, the signature restaurant for fresh seafood and steaks; the low-key Angler and Ale for burgers, catch of the day specials, and cook-your-catch options.

If you're contemplating a beach and tennis vacation, with options for kids, you also ought to look at:

Seasons. Year-round, though busiest from a tennis perspective from mid December into April.