Courtesy Garden of the Gods Resort

Garden of the Gods Resort & Club

Garden of the Gods Resort traces its tennis pedigree to 1950. Al Hill built it as a summer tennis club for friends in Colorado and Texas, among the latter Lamar Hunt, who would later found the World Championship Tennis circuit. Perched on a mesa with panoramic views of Colorado's red-rock Garden of the Gods, the club soon gained fame as an exclusive retreat, drawing such Hollywood elites as Rudy Vallee, Robert Mitchum, Claudette Colbert, and John Wayne along with political, business, and literary figures, for tennis, dinners, and hanging out at the swimming pool.

Fast forward to the 21st century, and what was originally a summer-only tennis club with 22 rooms has become a year-round resort with 56 guest rooms and suites, a complex of six hard courts (four of them indoors), a 27-hole golf course, therapeutic spa, a fitness center, and three restaurants. Those rooms and the lodge overlook the 300-foot-tall sandstone outcrops in Garden of the Gods—a National Natural Monument—and the backdrop of 14,000-foot Pike's Peak. That view is beyond stunning.

Although there are only six courts in all, having four of them indoors is an enormous asset, one that allows year-round play. Although the original courts stood on the mesa with that distracting view, the current complex sits deep within the property 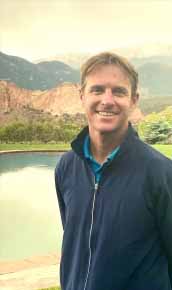 adjacent to the golf clubhouse (additional outdoor courts are planned for the next phase of development and those will be on the ridge with a view of the valley). Because there are indoor courts, the resort has a relatively large staff, headed by Gregg Heartt. A highly ranked junior and college player in Florida, he comes to The Garden of the Gods Resort from Lake Butler, Florida, where he was Head Tennis Professional at the prestigious Isleworth Golf & Country Club. While there, he developed the Junior and Men's tennis programs and expanded the women's program from three teams to 15. He and his credentialed tennis staff offer private and semi-private lessons, junior clinics, and customized getaways for groups and teams.

Courts & Fees. There are 2 outdoor hard courts and four indoor hard courts. Court fees: Outdoor, $25/hour for guests ; Indoor, $38/hour for guests.
Altitude Caveat: The Club 6,000 feet above sea level. Expect your endurance to flag in this rarefied air and and the ball to fly. Take extra precautions against sunburn, including the use of an industrial strength sunblock, hat, and sunglasses.

Golf Courses. Designed by J. Peter Maxwell and Peter Rathert, the 50-year-old Kissing Camels course comprises 27 holes lined with towering pines and backdropped by the Garden of the Gods and the soaring Pike's Peak. It's also long: any 18-hole combination stretching to 7,000 yards.

Spa & Fitness Center. Consisting of nine treatment rooms and a salon, the spa has an array of body treatments and massages—some of them available on an Austrian weightless environment bed. Also notable is its detoxifying salt-inhalation room and its herbal sauna. The fitness center, meanwhile, occupies several rooms in the main hotel, including one with cardio equipment arrayed along a wall of windows that look out on Garden of the Gods. That is supplemented by Matrix and Life Fitness circuit training and TRX apparatus, a movement studio for Pilates, yoga and a variety of other classes, a spinning room, and personal trainers.

Though spacious and well-appointed, down to a gas-log fireplace, the most striking feature of the hotel's 56 rooms and suites are balconies or patios with full-frontal views of Garden of the Gods and the mountains.

At the core of the main lodge stands the Rocks Bar & Grille, a convivial gathering place that can spill out onto the outdoor patio. Drinks aside, it offers small, shared, and large plates ideal for casual dining. Not far away is the Grand View Dining Room, a sweeping space with floor to ceiling windows that frame, what else?, the Garden of the Gods and Pike's Peak. And finally, there is the Kissing Camels Grille in the golf clubhouse and open for breakfast, lunch, and dinner.

If you like the sound of the Garden of the Gods, compare it to:

Travel Instructions. By Air: The Garden of the Gods Club is 16 miles from the Colorado Springs Airport (COS), Which is served by Alaska Airlines, Allegiant, American Airlines, Delta, Frontier, and United.

So far, I haven't received any written feedback on Garden of the Gods Resort & Club. If you've taken a tennis vacation there, I'd like to hear your reactions.