Perched above the beach at Hulopoe Bay—a protected marine preserve that ranks as one of Hawaii's foremost snorkeling destinations—this elegant hotel stands out not only for the beauty of its setting but also its marvelous seclusion. The bustle and traffic of Maui, just across the former whaling anchorage of Lahaina Roads, is completely absent here, largely because there are few cars and only a couple dozen miles of paved roads. A mere 3,000 people live on the island, most in Lanai City at the heart of the island. That means that apart from a few daytrippers over from Maui and the guests of Manele Bay and an 11-room hotel in Lanai City have the island pretty much to themselves.

The hotel feels smaller than its 217 rooms, 51 of them suites, yet has a full complement resort amenities, including a Jack Nicklaus course with 18 oceanview holes, three Plexicushion tennis courts, a spa, fitness center, two scenic swimming pools with cascading waterfalls and lava-rock grottoes, and several restaurants, among them Nobu Lanai.

At the foot of the resort is Hulopoe Beach, where, if you're lucky, you may see a pod of 50 or more dolphins that frequent its waters. The gravel path from the resort to the beach passes the ruins of an ancient Hawaiian settlement before ending at a broad sandy crescent set between lava-rock promontories and bordered by acacia-like kiawe trees. It has a wilder, less manicured look than most resort beaches, which for me adds to its appeal. The Four Seasons has its own lounges, umbrellas, and watersports center at the end of the path; but this is a public beach, with picnic tables for the locals and daytrippers who venture down. The snorkeling is superb and so is the tidepooling, the latter made easy by a stairway leading from the lava bluff to the tidepools on the eastern side of the bay. 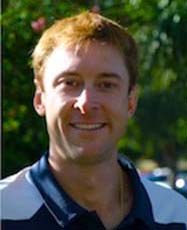 Peter Burwash International's Ryan Winters directs the operation on three terraced Plexicushion courts. These have been cut into the hillside behind the hotel where they have ocean views. A former top-ranked junior in New Mexico, Winters turned to tennis coaching professionally after college, both at the club level and internationally working with Special Olympics wheelchair tennis players. Prior to joining PBI, he had been the tennis director at a club in Gombolo, Italy. Here at the Four Seasons, he has supplemented the usual private lessons and clinics with a free "Round-Robin-Mix-It-Up-For-All" that combines match play, drills, and ball machine sessions for players of all ability levels. In the spirit of Four Seasons service, staff sends tennis players to the courts with towels and bottles of water, supplemented by Evian mist and fruit during intermission. There is also junior tennis one day a week as part of the Four Seasons "Kids For All Seasons" program. Court fees are $50/person/day. A full-service pro shop provides anything you may need in the way of clothing, equipment, accessories, or restringing services.